Two apprentices at Mercedes-Benz Melbourne headed off on an International Scholarship to extend their training in the USA this week. Mattin Nguyen, 23, and John Galvez, 22, are each working toward a Certificate III in light vehicle mechanical technology. They arrived in California where they were met by Garth Blumenthal, General Manager Fletcher Jones Mercedes-Benz.

The scholarship, presented by the Honourable Steve Herbert, Victoria’s Minister for Training and Skills, was awarded through the Skilling Australia Foundation and made possible with the support of the Perpetual Foundation of the Kingston Sedgfield Charitable Trust.

“For both scholarship recipients – this is will be a life-changing experience that will expose them to skills and work practices on another continent” said Skilling Australia Chairman Frederick Maddern OBE. 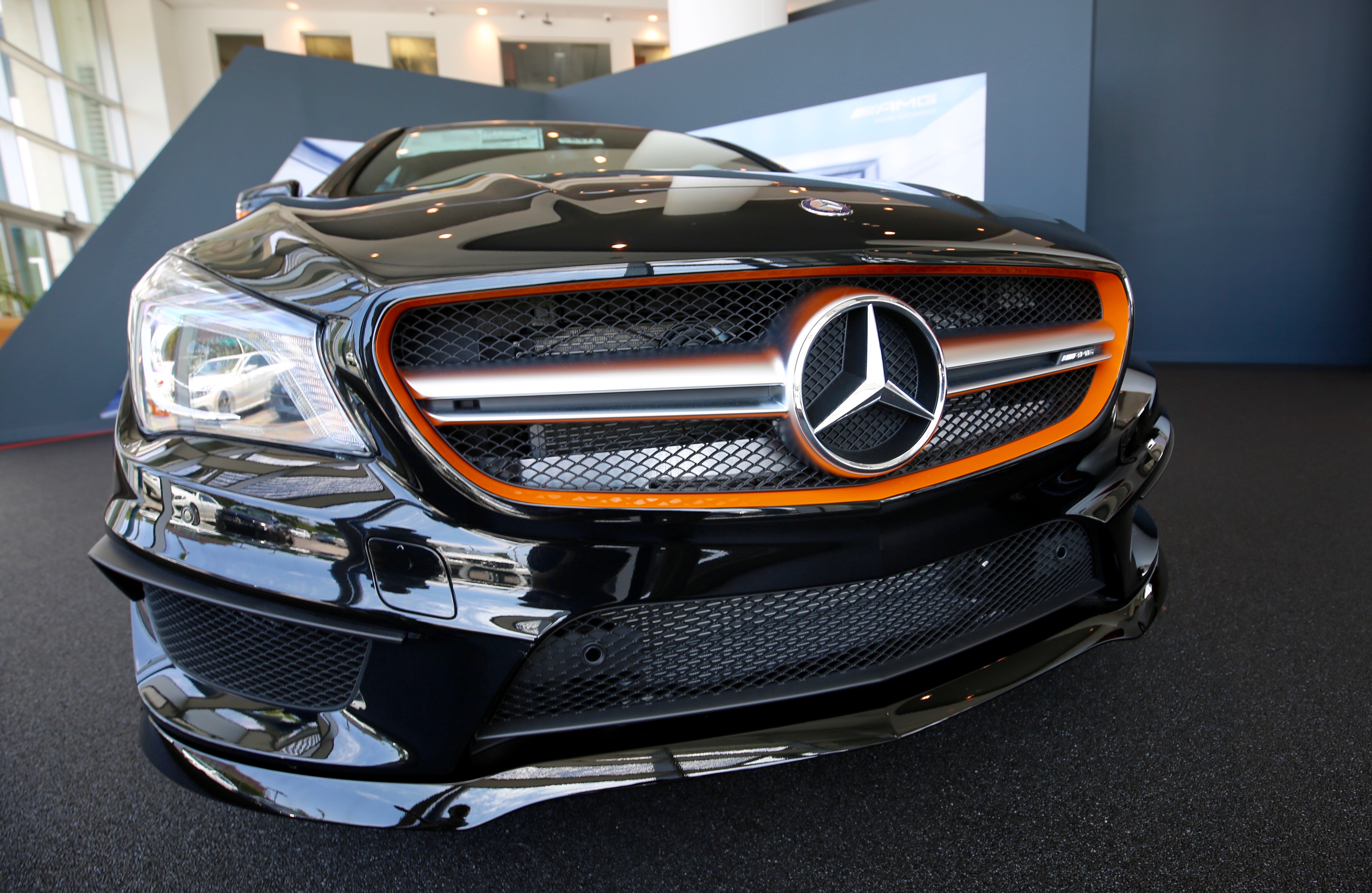 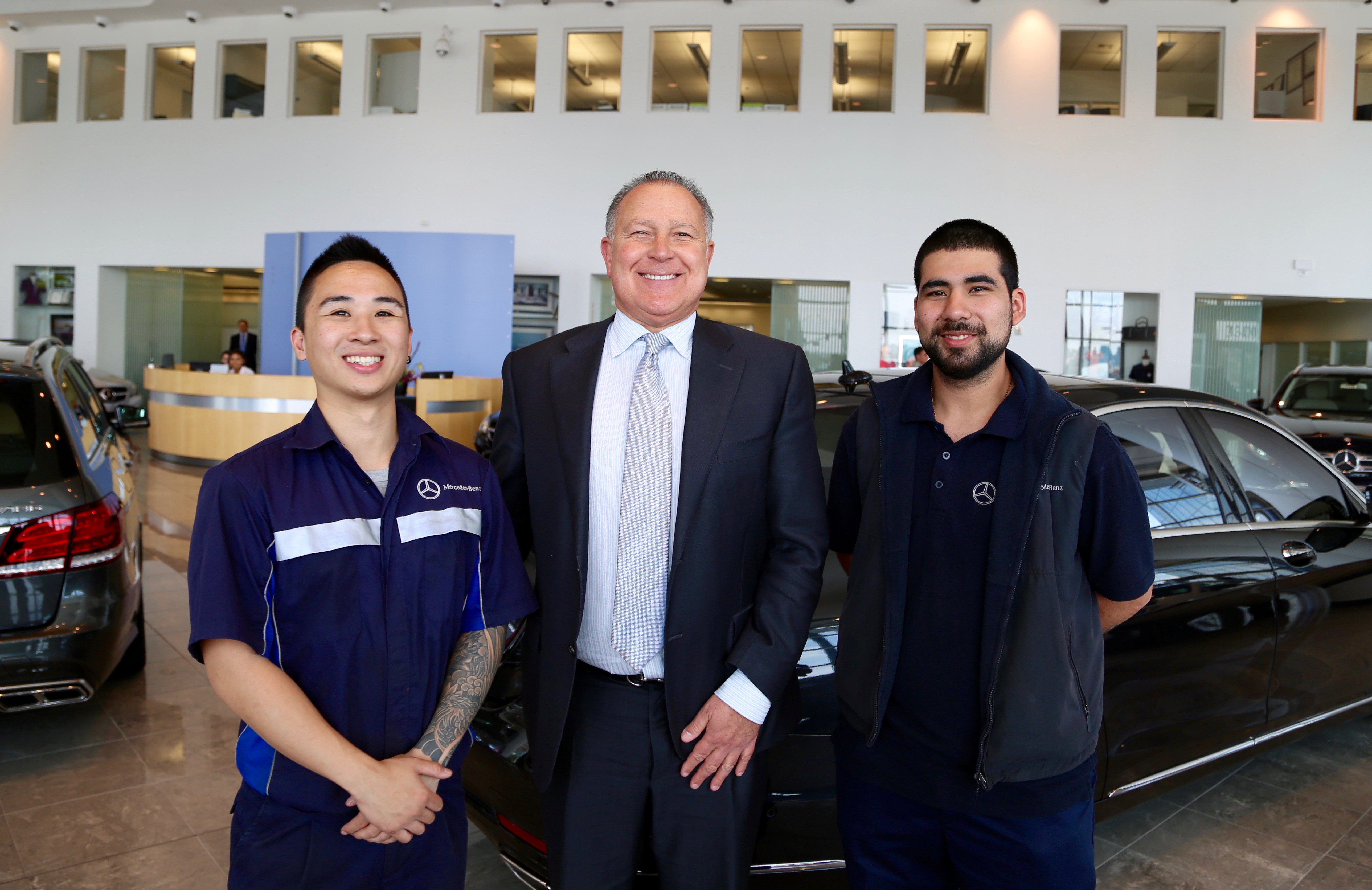 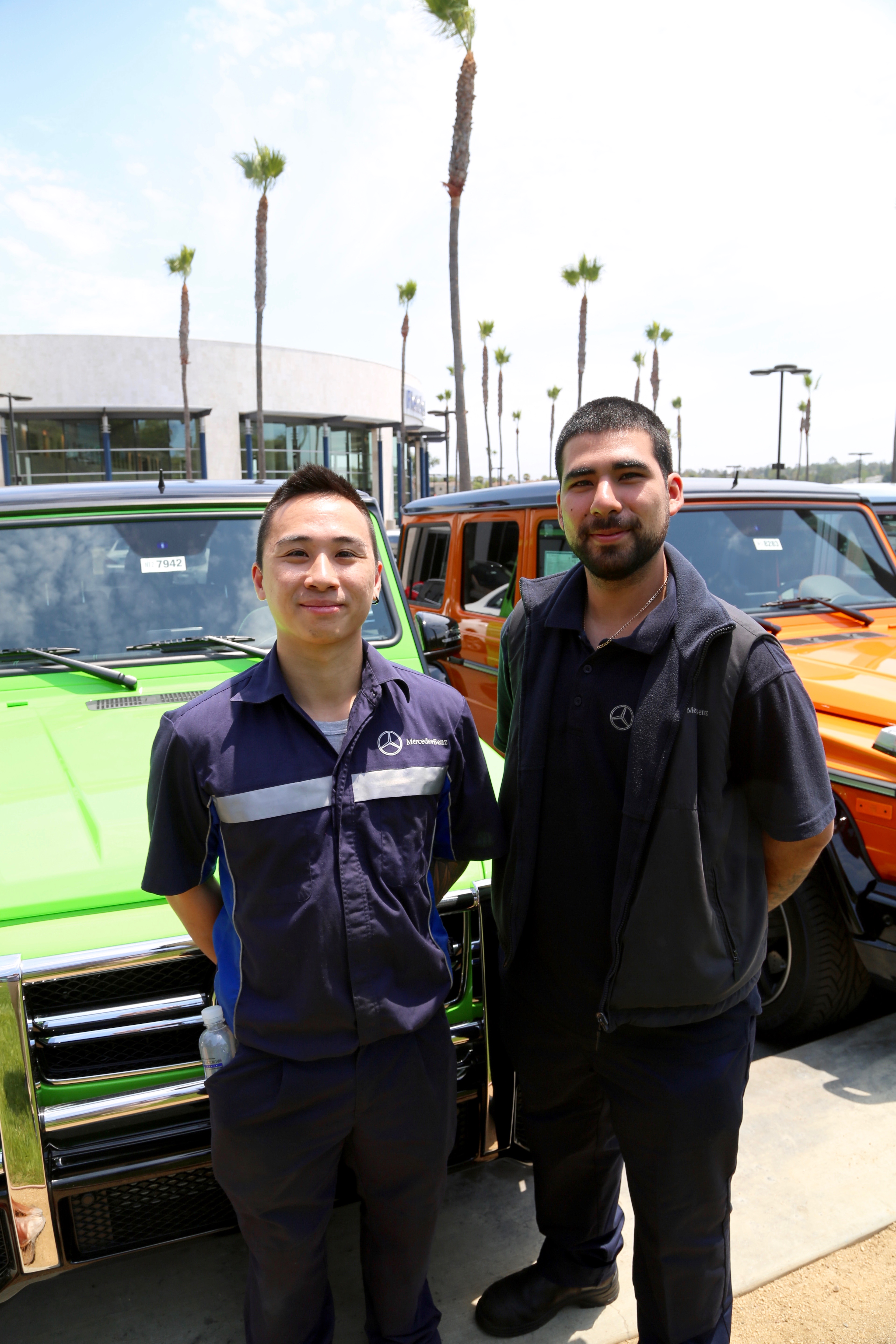 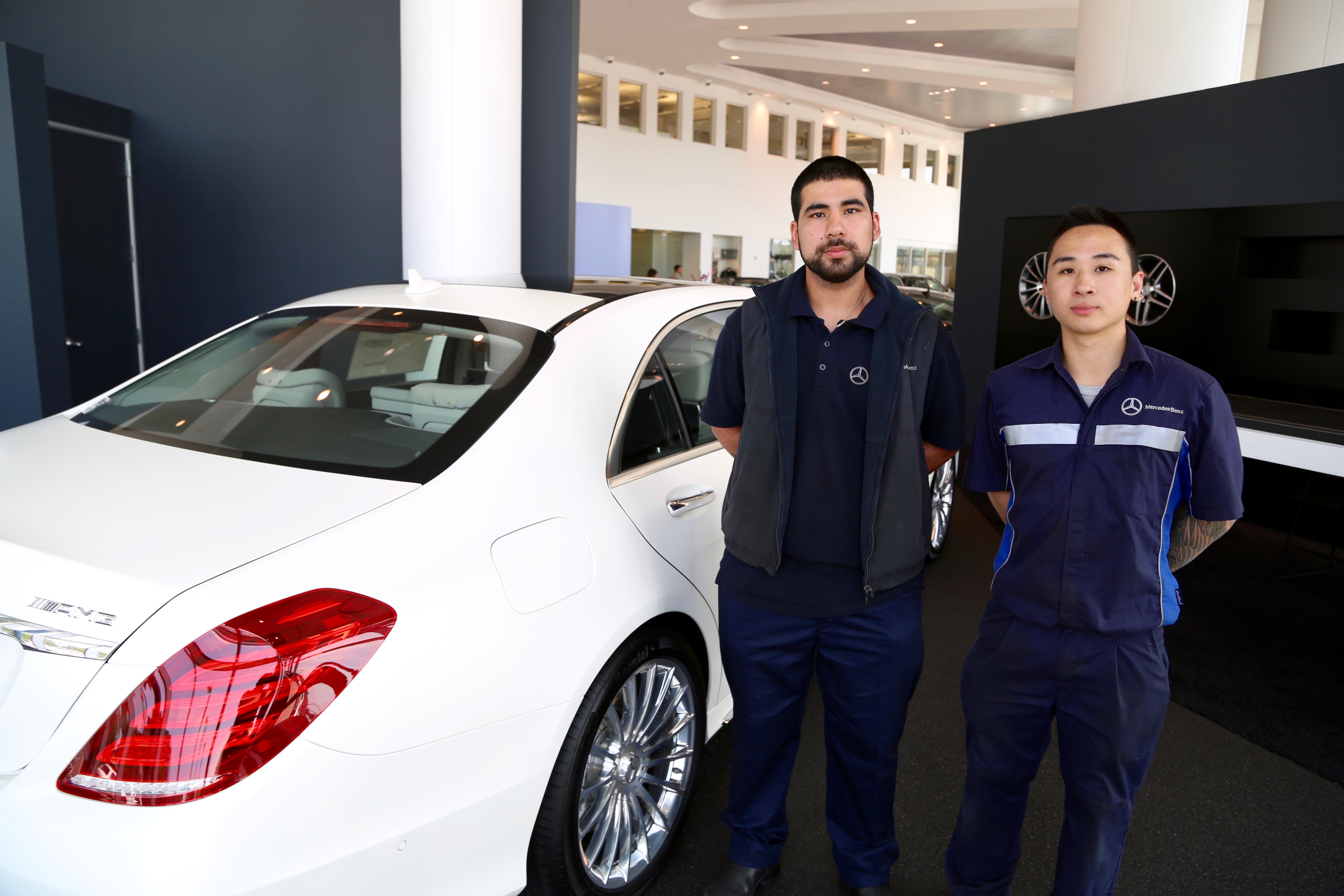 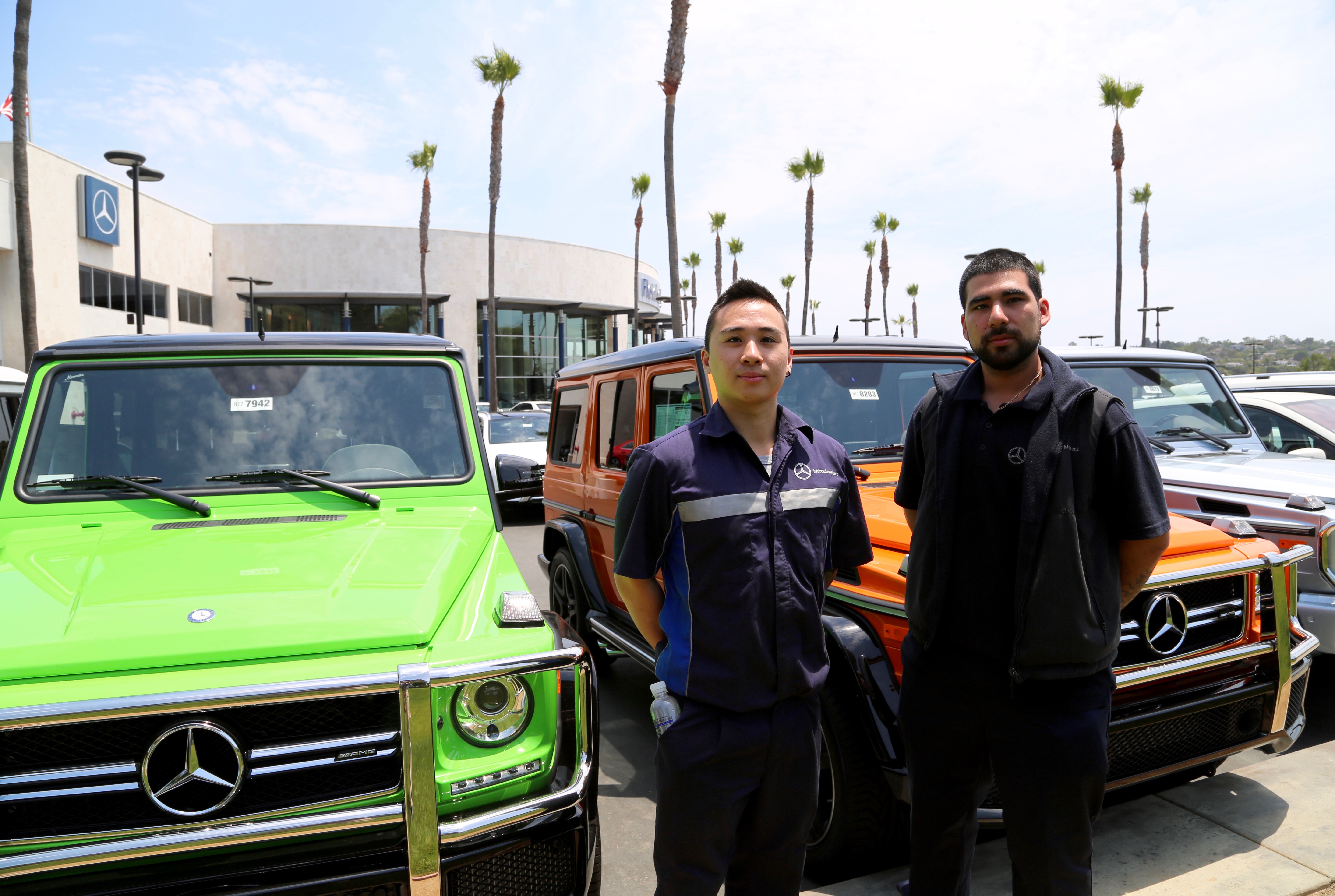 After finishing high school, John Galvez decided that earning a trade qualification was the best way to secure his future. He had always been interested in automobiles, and enjoyed helping friends and family with car repair and diagnostic work.

“After I finished school I was job-hunting for around a year. It was kind of hard finding an apprenticeship due to not many people hiring apprentices at that time,” John said.

Once he landed the apprenticeship with Mercedes-Benz Melbourne, John began learning new skills at a rapid pace. “I had a whole new list of responsibilities that I had not had before,” he recalled. “When I first started my apprenticeship I was nervous, but the staff members made it easy to adapt to a new environment.”

Now in his fourth year of the apprenticeship, John has found that one of the most important tools for success is “to be hard-working, and to always want to be better.”

Mattin is a third-year apprentice who grew up working on cars with his brother. He has always had a passion for automotive mechanics and knew he wanted to pursue a career in the trade.

“I didn’t have the right resources and there was a lack of information, until I found WPC, who really helped me find my pathway,” Mattin said. “They helped me out with great support and insightful advice about different career aspects.”

Mattin feels confident about his career going forward. “I feel like I’m heading towards the right career pathway,” he said, adding, “I still feel as though there is more room to grow and achieve more goals after completing my apprenticeship.” For others considering apprenticeship or starting out in their careers, John and Mattin have similar advice. The most important thing, according to John, is to “start—and finish—training in a trade or career that you enjoy doing.”